So, I adopted some dogs. Stray dogs. From another country. Because that is totally normal, right? It’s like this. The man and I were on a vacation in Turks and Caicos, and my friend Sara was fostering 3 4 week old puppies on Pine Cay. It took me approximately 12 seconds to immediately fall head over heels and claim the black one for my own (then Bernie). My dude had a better handle on his emotions and waited an additional .2 seconds to claim the little brown one (then Josie), as his eyes glazed over with stupid puppy love. Each day of our vacation we played these guys and their brother Bruiser (now Harley). Come to find out, the puppies weren’t travel-able until they were 8 or so weeks old….So I had to bite the bullet and go back. To a beautiful island country to claim some puppies. Life is really hard, guys. 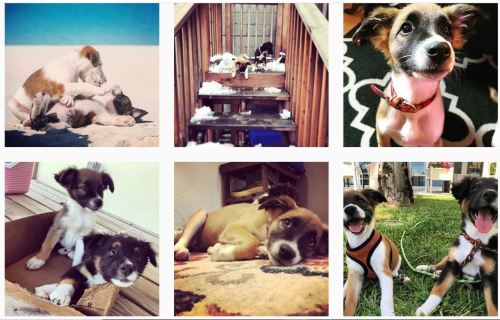 I mean. How could you not plotz over these cuties?!

Rizzo (the little brown girl) and Gizmo (fluffy black boy) made their cross continental journey from TCI to Alaska (on an adventure neither Sara or I will forget. Cab rides in NYC, pizza, peeing literally everywhere) and we just celebrated their 1st Gotcha Day on March 1st. No one told me having puppies was basically like adopting toddlers, and it was a little touch and go there for a bit. We lost a whole lot of teeth (where do they come from?!) and the house is officially rug free (So.Much.Pee.). I was also quite sure my life was going to become a very Charles Dickens-esque as I was no longer able to work, lost the house and we would be begging for more gruel on the street. But we all got our collective shit together, and the Idiot Twins learned how to shake last week.

So, what the hell is a potcake anyway? “The potcake dog is a mixed-breed dog type found on several Caribbean islands. Its name comes from the congealed peas and rice mixture that local residents traditionally eat, as the overcooked rice that cakes to the bottom of the pot would be fed to the dogs. Although appearance varies, potcakes generally have smooth coats, cocked ears, and long faces. A group of potcakes is known as a parliament.” Basically, they are really expensive stray dogs. But they were worth every penny and are basically the little loves of our lives. Even if I do refer to them as Adorable Assholes and have threatened to sell them to strangers in Eastern Europe. 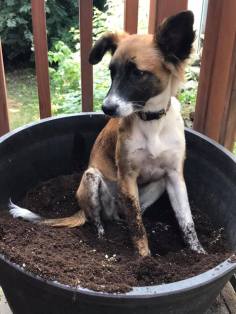 There is a fantastic rescue operation in Turks called Potcake Place K-9 Rescue. You may have seen them mentioned in any number of articles about walking puppies in paradise on your vacation. And it’s true. Visitors are able to walk and chill with puppies while in Provo, which helps socialize and exercise these little cuties. They are always looking for donations and sadly the puppies never stop coming. There is a super easy donate button on their page. I just donated a portion of the proceeds of my Potcake Mom necklace sales to Potcake Place. These folks absolutely love these dogs and it shows.

Of course no one is surprised to hear that the cakes have their own Instagram page. Because, c’mon. Duh. Head over and give them a follow. I know I’m totally biased, but they are pretty adorable.