This is the 5th or 6th avocado pit I have tried to grow and finally have success! Brief research on the interwebs say the tree will never fruit (but I have hope!), but I’m excited to keep this little guy (who will get quite big!) around regardless. 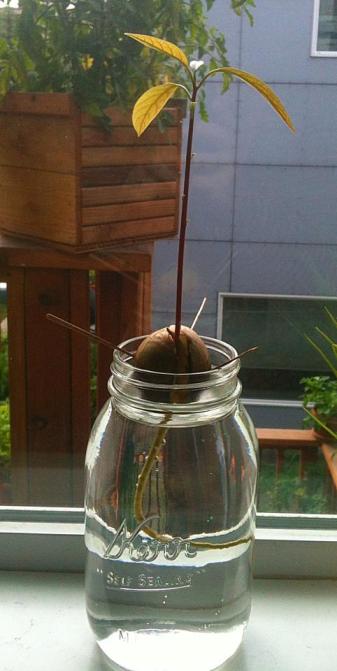 I was so excited to stumble upon our first little cucumber while I was trying to coax a vine back to the trellis – I had no idea it was even there! So exciting! The whole ‘grow stuff’ thing is really working! We also have a squash which is starting to form and most of the tomato plants are in blossom at the moment. I’m amazed at the sense of accomplishment and straight up pride I’m taking in these little plants started from seed….!

Many moons ago, before Christmas, I ordered a Grow-A-Frog kit for my husband as well as one for my retail storefront (twice the fun, right?). Thankfully the folks who ship the tadpoles watch the weather to make sure they don’t freeze and die in transit, thus our tadpoles arrived only yesterday. They were totally worth the wait as I’m completely enamored. The little guy at the house has yet to be named (we’ve been trying out different combos but nothing is sticking yet. Hubert Cumberbund? Engleburt Humperdink?), but my little guy at the shop was immediately Herbert Thunderdome. I don’t know why, but he looks like a Herbert (and who doesn’t want to be a badass in the Thunderdome family?). Herbert could of course turn out to be Herberta but we won’t know until the legs come in.

The Grow-A-Frog thing is pretty cool. These frogs are actually African clawed frogs and I’m told with proper care can live for years (5 is average – but some people are quoting 20!) and get rather large. In the tadpole stage they have see through skin so you can see their little hearts pumping as well as food digesting. So cool! I’ll be sure to update on progress – we’re about 3 weeks out from appendage growth. At this point Herbert measures in at a little over an inch long (with a constantly moving tail) and 1/2 inch wide.