We have been observing a ‘No Spend March’ this month which means my weekly day off routine of sushi-go-round is on hold for the time being. We’re working through things in the cupboard and the freezer, and getting creative (“They” say the average household has enough food in cupboards etc, to last a month. This house could last for 6…). Today’s non sushi lunch turned out so great, I just had to blog about it.

We sprout our own mung beans and this batch needed to be used asap before it got too “rooty” and asparagus is on the menu for dinner, so it was up to me to put these to use. There has also been a packet of rice noodles in the cupboard being ignored for a very (very, very) long  time so I thought it was time to cook them up as well. Saute the whole bunch with some chopped onion, a little butter and sesame oil, a squirt or two of Bragg’s (you could use soy sauce as well) and viola! So. Good. It made a full pan so there are definitely leftovers which is awesome because it’s so good! 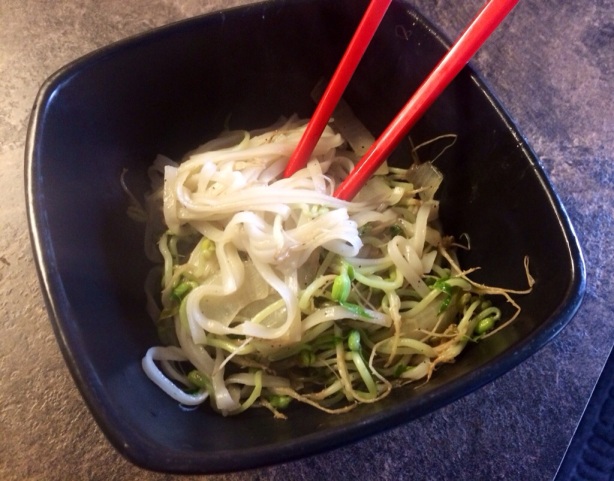 We try very hard to have at least one meatless day per week. We also tend to make pizzas on that meatless day as it corresponds to the only day of the week where I am home early enough to effectively rise some super kick ass dough. We each make our own concocted creation which makes for perfect pizzas each.

This week I made the following:

Viola – the best little rustically handmade pizza you can get (at home). Something like this in a swanky restaurant would run you around $20 or possibly more. At home? Maybe $3. We use cheap ingredients on hand and have lunch covered for the next day too. Perfection.

I came across a recipe for ‘zucchini boats’ on pinterest and wanted to give it a try. Well, I more used it as a base and took from it ‘onions’ and ‘zucchini’ but regardless they were tasty. Our local farmers market has had some gorgeous zucchinis of late, so getting through the pile on the counter has been a big part of our lives these last few weeks.

These are actually quite tasty and so easy to make. Stuff with whatever you have sitting around the kitchen. Rice? Quinoa? Tomatoes? Whatever floats your boat. (Boat! Ha! Get it?!) 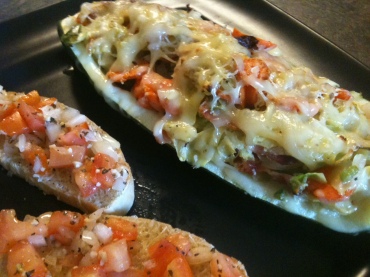 (pictured here with a side of bruchetta – yum)

I have been trying to hop on board with the Meatless Monday gig for the longest time, but I forget more than I would like to admit. So last night I was rather hell bent on making sure it happened today, by choosing a recipe and soaking the lentils. What resulted was pretty darn good, despite missing something (we still haven’t quite put our fingers on it).

Simmer 1 cup of lentils with 1/2 cup of onions until soft. I threw a dried chili pepper in for an extra kick as well.

While the lentils are a’simmering boil potatoes to mash, (you can handle that part without instruction, right?) and chop 1 carrot and another 1/2 cup of onion. Just as the lentils are about done, throw the veggies in a pan and saute for 5 minutes or so. In the last minute throw some chopped mushrooms in for fun (or not. whatevs). Mix lentils into veggies and then spread into pan. I threw a layer of peas as well as corn on the lentil mess and then spread the mashed potatoes on the top. Bake for 30 minutes at 350*. To fancy it up I grated some pepperjack cheese and broiled.